Create a Custom Enclosure with our Design Team

Free shipping on orders over $1499. Applies at checkout!

The inspiration for our enclosures was born out of practical necessity and love.

Cuddles and Ching were adopted and it was decided that they were going to be indoor cats, for their safety and health. But after a while, it was clear that the only excitement they had was when we came home at night and played with them.

They always attempted to make a dash past when the door opened and we felt like goalies trying to block their escape. They also spent a lot of time wistfully gazing out the window. It was important to let them have some way to go outside and be absolutely safe.

The solution needed to be renter friendly and able to come with me when we moved. It needed to be strong and durable. Nothing existed that fulfilled all these requirements and was functional, versatile and attractive too. So we decided to design our own.

We installed our "trial and error" solution around the window and watched my babies take to it immediately. Their energy increased, the escape attempts at the door stopped and they even lost a few pounds. Now they could exercise and explore on their own. Soon other people with pets of all sorts became interested and Habitat Haven was born. Our modular enclosures are designed to mix and match to suit your needs. The configurations are limited only by your imagination. The system is designed to expand so it can fit any space, budget, and even expand over time.

Habitat Haven is a labor of love. We’ve been providing safety and happiness to pets & their companions since 2003. Designed & Fabricated in the USA

Habitat Haven Designs Have Been Perfected Over 16 Years

We have been making Catio Enclosures since before anyone even knew what Catios were!

Our enclosures are built from strong, durable 2”x2” galvanized steel mesh and cedar. Cedar’s natural qualities act as an insect repellent (fleas, mites, etc.) and the strong steel can keep out any threat. The coated steel mesh we use is powder coated for extra climate protection and aesthetics. Our heavy-duty awnings and hammocks are made from fade-resistant, water-repellent material and are meant to stay out in all weather to provide shelter from sun, rain or snow.

The choice of materials and unique frame-less construction allow the structure and tunnels to be self-supporting as well as visually pleasing so that it practically “disappears in the background.” Use our pre-designed catio enclosure kits to find the right fit for you at a great value! Our pre-made catio kits are our most popular options and for good reason! The time-tested kits offer several dynamic designs at our best pricing! Pre-made kits will not work for you? Consider building your own kit of components from our large catalog of enclosures, tunnels, stairs, towers and more! An easy way to build something truly unique! Custom Designs by Our Team

Prefer to create something that you cannot find in our catalog? Our design team is here to help! We bring more than 15 years of design, engineering, and fabrication experience to make nearly anything possible!

What is the Cat's Den, Doggie Digs, and Hangtime?

My cats love their area! They go out regardless of the weather but do prefer sunny days. I put a tarp over the tunnel so they can camp out under it and stay dry. They love to travel down the perches to get to the side that's closer to the bird feeders. Actually, the birds like to perch on the planks. I hope they are careful. Lol 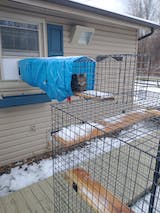 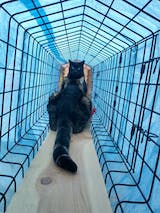 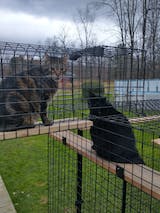 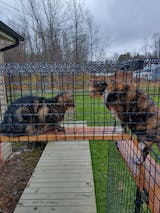 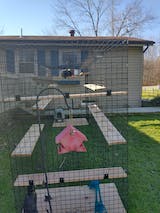 We absolutely love the new catio! It took my husband and step son a whole day to put together but they took their time to make sure it was done correctly. The materials are all high quality. The cats are really enjoying spending lots of time in it and our most active kitty even seems a little more relaxed! :)

When we opened the tower packaging we noticed the top of the tower had been damaged in transit. So I called Habitat Haven and spoke with Matt, who was very helpful and said they would send a new top to replace the damaged part. We received the part a few days later. This company’s customer service is outstanding! 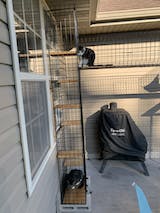 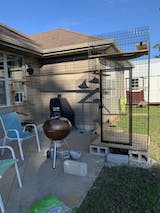 I purchased the cat tunnel to connect the main house to the cabana. The cat love it. Everyone who comes over comments and just marvles about how cool it is.

I purchased this unit second hand off craigslist for the steal of the century. The original owners had it for over 8 years outside and unprotected in all weather here in the mid-atlantic. I came along and disassembled and reassembled in my carport. The cats love it and am now starting cat-door training. We even have a few neighbor cats come to check it out and scratch their heads over it. I needed some additional parts for the shelving and the customer service and shipping was excellent. I highly recommend this company for both lasting product and continuing service. 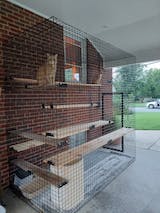 My F1 Savannah cat used to run away when we were opening the door. We lost him for a several days a couple of times. Now both of my cats can enjoy their outdoor space whenever they want. I had great cooperation from the guru at Habitat Haven to help me design a solution that would be cost effective for me. The material is good quality and everything came up precut with a set of tools to facilitate the installation.