Create a Custom Enclosure with our Design Team

Free shipping on orders over $1499. Applies at checkout! Description
Two-step stairs with bottom left and top right access. Stairs are a great way to gracefully move up or down from enclosures, tunnels, and towers.  All stairs come with cedar steps and two access points. The overall size is 12"W x 16"L x 30"H. The step rise and run each measure 8". Stairs will arrive fully assembled with access points/openings based on the configuration you choose.
Access Hatch

If you have any concern that your cat(s) may get stuck, confused, or fall ill while inside the catio stairs...have no fear! Small access doors are available to allow you to get access to your cat that may need your assistance inside a component that is unaccessable in any other way.

This item is made to order. This means the item is fabricated by hand just for you. It goes through an array of steps before it becomes ready to ship. The estimated delivery date shown on this page is primarily accounting for this fabrication time. In some cases, it may be ready in a shorter amount (in very rare cases a bit longer) of time and we will do our best to get it to you as fast as we can without compromising quality! You will be notified via email when your order is ready to ship! Each component that we make is designed and created by hand in our shop in Michigan. We fabricate each enclosure, tunnel, tower, and stair to the highest standards. Our materials have been thoroughly tested in thousands of applications since 2003 to ensure we offer the most flexible, attractive, and durable pet-safe enclosures available today. Each component goes through an 8-point inspection to ensure that it meets our expectations and yours. It does not leave our shop until we would be willing to let our own kitties enjoy it. We use galvanized steel mesh that is set in a 2” x 2” grid pattern that is then powder coated for added beauty and durability. Most of our items ship specially flat-packed and partially assembled via freight carrier (on a wooden pallet) to provide the highest level of security and to minimize the occurrence of shipping damage.

Cats enjoy it, especially at night to check out all the visiting critters. 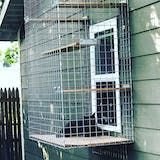 My two Boys are indoor cats, and now they have been enjoying their time outside in the sun for almost three months now. They really love it. I'm never sure which shelf I will find was their choice for the nap each day. They are protected and safe and very happy, and Mom does not worry about wildlife pestering them when we are not home. Habitat Haven and Matt made the process to design the tunnel and get the measurements super easy. The catio arrived early, and the local installer, Robby, did a great job getting it in within a few hours. I did place a few cactus plants in front of it - just to make Mom feel better so they are not so easily visible. I live in the suburbs. My patio is pretty small, and the catio is a perfect size, and the Boys love it. Mater will stand by the little door to it in the morning waiting for me to open the door some days. I cannot recommend Habitat Haven enough. Thank you! 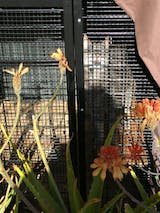 Our outdoor cat habitat was done in two phases about a year apart. The first was a "tower" that attached to an exterior stucco wall and slid up next to a side opening in our garden window. We weren't sure about the attachment method, meshing with the existing window, spacing of shelves, exterior access, and accommodation for expansion (that is, if our picky cats actually liked it). After numerous emails (and a couple of phone calls) designing and re-designing the structure we clicked the purchase button. Within a couple of weeks a large box arrived and few hours later our careful measurements and discussions clearly paid off. The structure fit perfectly and our cats immediately explored the new space. The second phase was initiated about a year later. Again, after several emails the design of the extending "tunnel" was refined, and we finalized our purchase. Less than a week later it arrived in two boxes, which we were able to install in a few hours. The cats (Rosie and Chico) moved in right away. As before, the effort spent in measuring and planning paid off. In both phases our original designs were analyzed and simplified by Matt Hough the Habitat Haven "Customer Experience Guru." His help was invaluable and matched only by the quality of construction. It was expensive (particularly shipping) but well-worth it. 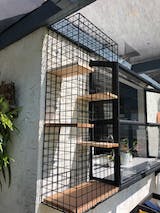 It's been a year and a pretty big project. We custom ordered our catio to fit in-line with our deck & shed and house. I wanted plenty of room for our 4 cats to explore, play or nap.
We only had the window unit installed when the first kitty found the cat door and learned about the catio. She was amazed. The others soon followed her out. Their favorite place is the tunnel bridge. (We may need to install a bypass, as they LOVE to block each other from going through 🤣)
Assembly and installation isn't 'hard', but a 2nd set of hands is helpful. I also recommend building a platform for the enclosures to rest on if your ground is not level.
Great product! Great customer service! Thanks, HH! 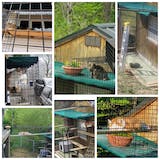 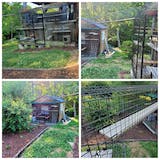 I Bought 2 corner Hammocks for the Catio. The Smaller cat loves them, my bigger cat is 20 LBS, he doesn't seem to like them. The Hammocks are very well made out of a type of canvas material. 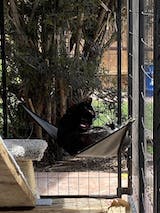 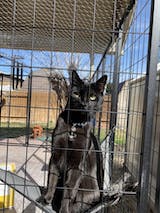 We (2 humans & 3 cats) downsized to 240 square feet, plus lofts and cat walks, so attaching an additional 46 square feet of outside space was really great for the cats. They love watching birds and bugs and I love how sturdy and safe Habitat Haven’s Lion’s Den is. Thank you! 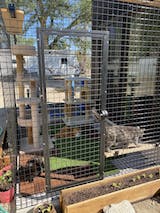